Alex Trebek, the host of Jeopardy!, passed away on November 8, 2020, with a celebrated television career under his belt and quiet philanthropic life. During his last episodes, the late Trebek requested viewers to create a gentler society, allowing the less fortunate citizens to fit in better. This request and down-to-earth life saw son, Matthew Trebek, donate mens professional clothes to a homeless shelter in Los Angeles, helping cement the host’s values of creating a more inclusive society. Unknown to many, Jeopardy! was just one part of Trebek’s life. Below we take a look at various areas of his less-known life.

Trebek’s Wardrobe Donated to the Homeless 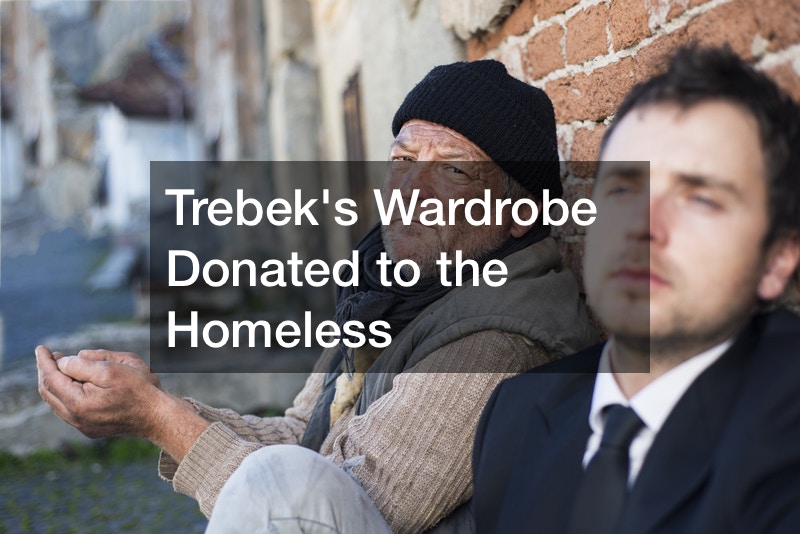 Upon Trebek’s death in November, he left behind an enormous wardrobe of mens professional attire used during his show tapings, with clothing items comprising of about 14 suits, 300 neckties, and 58 dress shirts, all of which he had used to host the show for 37 years. Faced with the dilemma of what to do with the collection of attire, son Matthew Trebek and the show’s producer decided to donate mens professional clothes to incarcerated and homeless men in need of a new beginning to their lives.

The beneficiary of his clothes was a New York-based non-profit organization named Doe Fund, with the full package of the wardrobe intended to help its members. The non-profit currently works with the homeless and men formerly in prison, providing services such as housing while also helping them get job opportunities to kick-start their lives. The organization also serves as an addiction treatment center and a trade school complete with paid work for its members. The package of Trebek’s donated clothes comprised the previously mentioned clothing items, along with belts, sweaters, parkas, polo shirts, and dress slacks.

According to his son, Matthew, who co-owns Harlem-based restaurants such as Oso and Lucille, the non-profit was the perfect fit due to their work, giving second chances to those who needed it the most. This was in continuation with Trebek’s work, having been a regular contributor of charities and programs that gave a hand to the homeless in Los Angeles. The contribution, therefore, made sense to donate mens professional clothes to help ease the burden on the less fortunate.

After the clothes’ arrival to The Doe Fund, priority was given to the men who had completed their career training waiting to attend job interviews in various areas, acting as a needed support mechanism to their transition in life. 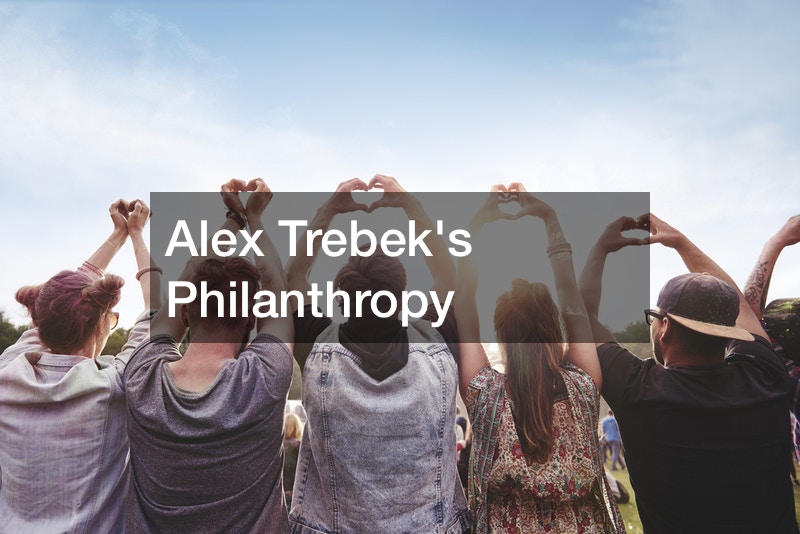 Alex Trebek’s philanthropic works can be traced to various charities, including the United Service Organizations and World Vision Canada. The latter saw him travel to various developing countries, with efforts geared to help children in these areas have a better future. His work with the United Service Organization, on the other hand, led Trebek and the Jeopardy! crew to join forces in 1995, allowing him to travel to various military bases throughout the world to help boost morale and find contestants for the show.

In 1998, he donated 74 acres of land to the Santa Monica Mountains Conservancy. This was after purchasing it an estimated $2 million, helping residents in the area enjoy open land for horseback riding, hiking, and biking. The land is currently known as the Trebek Open Space to honor his legacy. Trebek also donated $5 million to the University Of Ottawa in 2016, helping fund the Alex Trebek Forum for Dialogue. The donation was intended to expose students at the university to a diverse range of views through avenues such as speeches, lectures, and public panels from the university’s researchers, guest speakers, and government officials from the world. The donation’s excess also helped to fund a Distinguished Speaker Series, which saw Nobel Laureate Leymah Gbowee make a presentation for the students.

Before his passing, Trebek also contributed $500,000 to the Hope of the Valley Rescue Mission, a Los Angeles-based homeless shelter. The funds will help build a shelter for seniors in the San Fernando Valley. This was in addition to an earlier $100,000 donated to the same organization aimed at building another homeless shelter in North Hollywood.

In addition to the above, he also donated to the Pancreatic Cancer Action Network (PanCAN) a few months after his cancer diagnosis. Appearing on a walk to raise awareness on pancreatic cancer, he encouraged survivors to keep fighting and remember that there is hope to beat cancer.

His love for the Musk Ox also saw him donate to institutions such as the Musk Ox Farm in Palmer and the Musk Ox Development. Being an endangered species due to increased demand for their wool and meat, the non-profits help keep the animal species alive.

Upon his death, Trebek’s work led his son to donate men’s professional clothes to a homeless and drug addiction clinic.

Alex Trebek’s Awards from His Work and Donations 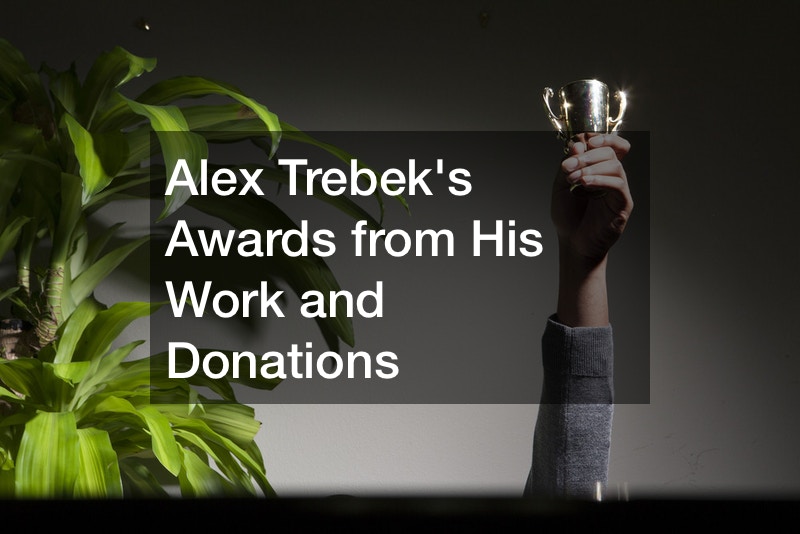 Due to his outstanding work on Jeopardy! and his donations throughout his lifetime, Trebek received several awards, some of which include:

The Honorary Degree of Doctor of the University from the University of Ottawa in the year 1997. He later got a star on Canada’s Walk of Fame in Toronto, paving the way for others such as Outstanding Game Show Host for the Emmy Awards on seven occasions. Joining this decorated list was also a star on the Hollywood Walk of Fame.

In 2011, Trebek received a Lifetime Achievement Award at the Daytime Emmy Awards. He also received an Honorary Doctorate from Fordham University the same year. With an impeccable record of hosting, Trebek holds a Guinness World Record for the highest number of game show episodes hosted by the same presenter, which was awarded on June 13, 2014. On 4 May 2015, the University of Ottawa named its alumni hall after Trebek, a significant contributor to the institution.

Trebek was awarded the Key to the City by the City of Ottawa in 2016. This was concerning his contributions to higher education and activism that saw him challenge students to ask the right questions and get answers that benefit the larger society. The following year, Governor General David Johnston named him Officer of Ottawa’s Order due to his outstanding work in television and his contributions to geographical literacy. Trebek received the 2019 Americanism Award from the Daughters of the American Revolution in June 2019. In the same year, he received the Academy Of Canadian Cinema And Television Icon Award during the 8th Canadian Screen Awards.

He also got an Access Awards from the American Foundation for the Blind after accommodating one of Jeopardy! Champions. 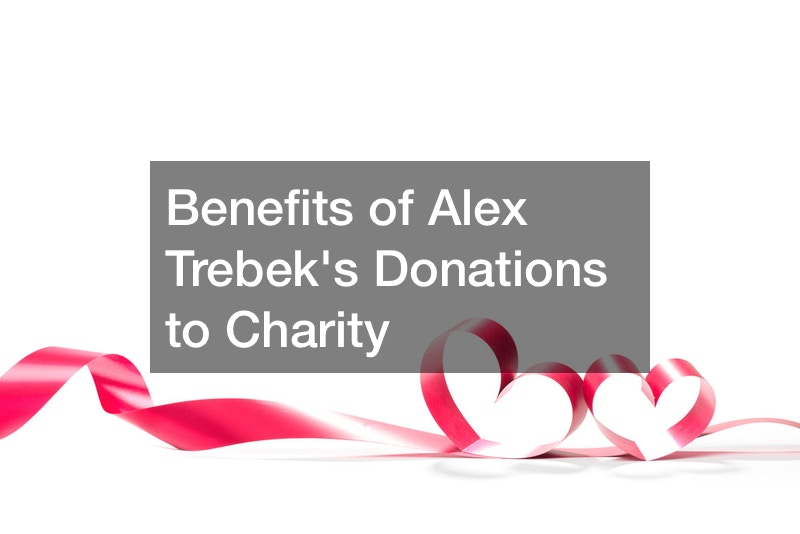 Numerous research indicates that donating creates a positive brain response, helping release endorphins and dopamine. The more you donate, the more the reward hormones you get, making charity a large contributor to feeling happy hormones in your body.

Encourages Family to Give

Going with Trebek’s example, his work with charities paved the way for his children to give back to society, with his son, Matthew, supporting the Doe Fund even before his father’s death. Giving to a charity such as when you donate men’s professional clothes is one way that allows dependants to witness the importance of generosity first hand, going a long way in building charitable traits in children from a young age. It also helps shed light on different struggles that the majority of the population may be struggling with, allowing them to appreciate what they have.

Social conscience is one of the most cited reasons people give to charities, with the belief of participation in a moral duty being a fundamental building block for donating. Trebek often insisted on appreciating the blessings gifted to each person, with the acknowledgment that it may not be the case for each citizen. Due to this, he felt the need to improve other people’s lives whenever he could, with personal responsibility steering his conscience to give rather than relying on a court-appointed mandate. By contributing more through examples such as donating men’s professional clothes, you are likely to fulfill such personal values, ensuring you live by your set standards of ethical beliefs.

This benefit comes in handy for people who take time out of their schedule to physically donate men’s professional clothes or participate in volunteer work. In hindsight, such work often comes with increased walking time and visits to local shelters and facilities, a factor that leads to better cognitive and overall body functioning. Rather than spend time on the couch watching television, volunteering your time will reward you with better health. Elderly adults often benefit from better blood pressure levels and resilience due to time spent moving around, an aspect that Trebek did in his later life.

With the previously mentioned feel-good hormones experienced every time you give to charity, you will generally tend to live better, experiencing more satisfaction than others who do not. Whether you prefer to give finances or contribute your time to charitable efforts, you will reap the benefits of better life satisfaction. As more people contribute around you, happier communities are also created, resulting in an overall happier society.

Trebek lived up to his request of building a kinder society, an aspect seen through his contributions to different organizations. Contributing allows you to help the less fortunate around you, with the most notable periods being during times of crisis. In addition to this, people struggling with various life challenges also have a chance to seek employment when you donate men’s professional clothes, helping them get back on their feet without being discriminated against. With local giving and private donations from the likes of Trebek, these are essential in building better communities and providing everyday assistance.

Improves the Longevity of Organizations

Charitable organizations only last as long as they get donations, a factor that allows them to reach out to the less fortunate and help them get legal help and solve any criminal law disputes that they may be faced with. Whether publicly made or private, contributions often include monetary donations. This factor has seen numerous organizations emerge from desperate financial times to serve communities for a more extended period. This means that any amount of help will enable them to go a long way, so remember to donate men’s professional clothes to your local shelter.

Improves Your Standing in the Community

Getting an elevated community standing is another benefit of giving donations, with Trebek’s numerous awards being an example of this. From receiving numerous honorary distinctions to getting coveted awards in the entertainment industry, his charitable nature paved the way for his good reputation. Frequent givers tend to have a better social standing in the community, as this area’s efforts show that you are invested in the community. The result is likely to lead you to get a seat to numerous community seats, affording you more power to change areas you are interested in.

Encourages the Greater Society to Give

One person’s effort in giving can often seem lost in society, but Trebek’s role has been evidence that one person is all it takes. Upon his announcement of his cancer diagnosis, one of Jeopardy! contestants made a significant contribution to the research of pancreatic cancer, helping the organization push forward with their research of the illness. This means that whether you simply donate men’s professional clothes or join forces with more contractors in the services you are interested in, the greater society will come together when you show up.

The last benefit of giving to charity is the reduction of taxes. It especially comes in handy when you need cash relief, allowing you to claim the value of goods donated, such as clothes or vehicles. Based on the amount you donate, you are eligible to get deductions equivalent to your donations’ value. This will allow you to get substantial savings on your expenses and will prevent any use for a loan.

Alex Trebek’s life is one to be emulated, with his charitable acts creating a canvas of how to build a better society.